As one of the first projects, the underwater painting was renewed at the vessel. This is necessary for two reasons:

How does an osmosis damage occur?

First of all, you have to distinguish between osmosis and osmosis damage. In osmosis, a liquid with a lower concentration of a dissolved substance penetrates through a membrane in the direction of the higher concentration. This is usually not a bad thing. Nature just wants to find its balance. Not so with the FRP material. If water penetrates the FRP due to damage to the hull or a lack of care, it is dissolved by the aggressive seawater. In the process, acetic acid is produced in a high concentration and thus attracts further seawater. The place gets bigger, expands, that water makes its way to other places of the hull and at some point the pressure is so great that the coating bursts off and even more water penetrates. So a disaster takes its course. Over time, the hull is weakened, there is a risk of a water intrusion that inevitably ends in doom if you do not eliminate osmosis damage at an early stage and prevents further water intrusion.

Anyone who has ever had an aquarium knows this from his disc: In the nu it is covered with algae and populated by snails. Nothing else happens to the hull of a ship. If you don’t do anything about it, it has grown within a few weeks. The fouling makes the ship heavy, slow and drives up fuel consumption. To prevent this, the boat would have to be cleaned every few weeks. Boat washes would be a good idea, but have not prevailed so far. Instead, highly toxic substances were installed on the ship over many years, preventing growth. Fortunately, the worst substances are now banned. Still, poisoning marine animals is still, in almost all cases, the means of choice when it comes to anti-foul-painting.

For sailboats, “self-polishing” coatings are usually used. In the course of a year, the paint dissolves from the ship and thus contributes massively to the poisoning of the oceans. Confences include Di copper oxide, petroleum benzols, xylene and Ehtylbenzole. When reading the classification, one is disturbed:

“Acute toxic”, “acutely harmful to water”, “long-lasting water-carrying”, “developed toxic gases when in contact with acid” , “is absorbed via the respiratory tract”, “toxic with long-lasting effect”, “acutely toxic”, “long-lasting toxic” and so on and so forth. The most cynical thing I find is the hint that the paint should not come into contact with water. The effects in humans read no less dramatically: Shortness of breath, headaches, drowsiness and drowsiness, dizziness/anxiety, muscle weakness, unconsciousness. I honestly don’t understand why that stuff is still permissible. Perhaps because there is a lack of alternatives? With nothing!

A long-standing alternative is Coppercoat. The stuff is not an innocence lamb either, but due to its slow dissolve much less stressful for the environment. Coppercoat has an extremely high copper concentration. This corrodes over time into copper oxide, which then converts together with the seawater into copper chloride, which is already present in the sea in very low concentrations. Due to the high concentration on the hull, it causes the marine animals to die. It becomes critical when the fuselage or its uncorroded copper gets on coral. These then die from it quite quickly. So for me, no alternative either. What then?

Silicone is largely harmless. Only in extremely high concentrations is this substance – like almost all – harmful. Silicone unfortunately breaks down very slowly, but if so it disintegrates into water, sand and a tiny bit of carbon dioxide. (y) How, then, is it supposed to help prevent the growth of a ship? Well, the coating on the hull swells up something, so the marine animals “think” it’s water. So they don’t even get involved in the first place.

Unfortunately, such a curled coat of paint is also slightly vulnerable. But it lasts at least 2 years and can be easily and easily cleaned on the way with a sponge. As a result, the choice was not difficult:

Aurelia gets a silicone roast

By mid-March, the time had come. The ship came out of the water, was carefully sanded, primed, primed once more, and once again and eventually got her little black put on.

Just in time for leafy Thursday, we craned back into the sea. Aurelia was ready for baptism (coming soon). 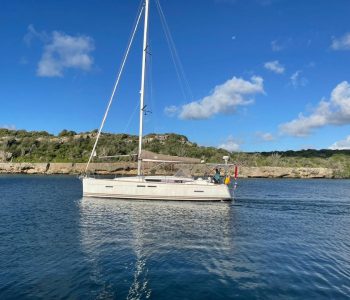 My Days In Savusavu

Single Handed Across the Pacific

Through the Panama Canal

Aurelia in Times of Corona